The village that became vibrant, making marvellous
By Jason Dowling 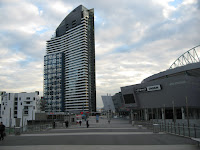 CHADSTONE shopping centre? Espresso machines? Football; horse races; or the Hoddle Grid - what has made the city it is today?  will soon celebrate the 175th anniversary of the Enterprize sailing up the to create a settlement on a spot described months earlier by John Batman as ''the place for a village''. In the ensuing years, physical, political and cultural events have forged the present-day city of 4 million that stretches 100 kilometres east to west.
http://www.theage.com.au/victoria/the-village-that-became-vibrant-making-melbourne-marvellous-20100820-1390z.html
Posted by rorybaust at 14:46 No comments:

Down to the undecideds as regional swings hold the key

JULIA Gillard's two months-old prime ministership hangs in the balance with the government narrowly leading on the national two-party vote, but its fate resting on regional swings, according to a final poll for The Age.
Labor leads 52 per cent in the Age/Nielsen poll, down a point in a week, to the Coalition's 48 per cent, in two party terms - a swing of about 1 per cent against the ALP since 2007.
But nearly one in five people said they were somewhat likely or very likely to change their mind before voting today.
http://www.theage.com.au/federal-election/down-to-the-undecideds-as-regional-swings-hold-the-key-20100820-1390e.htm
l
Posted by rorybaust at 07:27 No comments:

A COALITION government would revive the controversial Howard-era plan for a national access card to identify every individual receiving government benefits, shadow treasurer Joe Hockey has revealed.
On the eve of what Prime Minister Julia Gillard says will be a ''cliffhanger'' federal election, Mr Hockey has told The Age that giving everyone a single identifier for access to health and welfare benefits could lead to ''massive improvements in productivity in health and welfare''.
http://www.theage.com.au/federal-election/coalition-to-revive-card-20100819-12s1l.html
Posted by rorybaust at 07:07 No comments: from The Melbourne Age

CONVICTED Australian drug smuggler Schapelle Corby could be out of prison in just over four years as she enters an accelerated remission program.
The shortened prison term is possible even if Indonesian President Susilo Bambang Yudhoyono rejects her clemency request, launched in April.
Corby, 33, yesterday received the biggest single cut in her 20-year term, with five months sliced off as part of the usual round of remissions marking Indonesia's independence day. Smaller remissions are also granted at Christmas or Idul Fitri (after Ramadan).
http://www.theage.com.au/national/corby-release-in-four-years-20100817-128iv.html?autostart=1
Posted by rorybaust at 10:47 No comments:


With an election at hand its important to remember some of this governments actions, and so I have chosen to re- explore the increase to the cigarette levy. So let''s be clear about this smoking is a both a bad and disgusting  habit, it may prematurely end your life or at best make you sick, it costs a bucket load of cash to support and it also an addictive and smelly habit.

A couple of months ago now  the Australian government decided that it would increase the price of  cigarettes by increasing the excise (tax) charged by an additional 25%, adding on average $2.00 to the price of  a packet of cigarettes.  This policy as announced by the then Rudd government would raise an extra $5 billion over four years, which the Government will put towards its health and hospitals overhaul. So the news is all good, the government is doing something to wipe out the scourge that smoking is in on our community, nothing to alarm us here, but no, I disagree.

Firstly was this really a health measure ? I am not so sure and I suspect another cynical attempt to increase taxes with out a fight, as whom would dare question that this is not about health, after all this was not the only measure announced . The government will also force tobacco companies to put cigarettes in plain packaging, sorry they are going to think about that one, this was one of the many thoughts that came from the Preventative Health Taskforce, but like the Henry Tax Review only the measures that the government find palatable are ever implemented.

Health Minister Nicola Roxon said the tax increase will encourage about 2 to 3 per cent of smokers, or 87 000 people, to stop smoking. Opposition Leader Tony Abbott did say that the Government were making a tax grab and this I think is correct and I will explore why.

But even daring to suggest anything but the purest of motives of our government is immediately hit with scorn, that by taking a stand against this measure I would support the premature death of thousands of Australians. It is almost similar to Senator Conroy's questioning of any one whose criticism of the proposed internet filter as being an advocates of child pornography, not a very flattering portrayal nor genuine.  However this disingenuous approach is how our now Gillard led government deals with criticism that and it would appear advertising if the current batch of election propaganda is to go by.

Approximately 20% of the Australia population are smokers so this would equate to around  4 million Australian or say a county the equivalent of New Zealand, so we are talking a substantial amount of people, who consume a perfectly legal product that the government knows and independent scientific results as well as Tobacco company funded research has found to be harm full to humans. It has over 400 chemicals added to a natural product that is legislated and controlled by governments.

The bottom line is this product kills, everybody knows it, yet it remains a legal product. The government is complicit in the harm that this product causes despite any claims to the contrary.  As long as  tobacco is taxed the imperative to reduce its consumption is compromised by the need to collect that tax revenue.

If the aim of the tax increase was to encourage smokers to quit why would the cost of products designed to assist in this pursuit of nicotine withdrawal should also rise in accordance with the price increase to the tobacco products.

If the aim was to offer an incentive to people  to quit tobacco why not legislate the usage, the prescription of  tobacco and thus remove availability to a new batch of addicts.

Why not refer to nicotine addiction as what it is a serious health issues that needs to addressed not taxed.

This government sees smokers as nothing more than a taxation solution, if they were serious about wiping out smoking they could do a lot more.  So the next time the government tells you they are doing some thing to combat a problem I would look a lot deeper, there is probably a new tax involved and a disingenuous story to boot. With an election campaign at hand and Australia heading to the polls on the 21st August this form of disingenuous taxation is more the important in deciding which side of politics your support at the ballot.

Do you have an opinion please leave me a comment, I would  love to hear what you have to think.
Posted by rorybaust at 09:30 No comments: