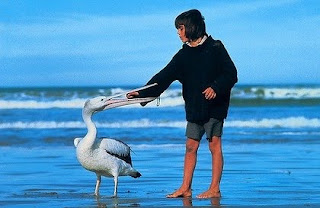 One of the 3 pelican stars of the 1975 Australian film Storm Boy, Mr Percival has sadly passed away at Adelaide Zoo aged 33. Storm Boy is a 1976 Australian film, based on the children's book by Colin Thiele about a boy and his pelican, it was filmed on the fierce deserted coast of South Australia's Coorong.
Posted by rorybaust at 11:33