oh to be rich and powerful, because even theft is only a minor obstacle 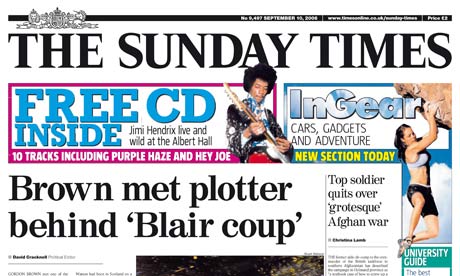 I once asked if there was justice in this world when comparing the harm done by the irresponsible bankers that caused the GFC and the penalties handed out for copyright infringement. I now know the answer and I am sure it will be of no surprise to regular readers of this blog and of course there obviously is no justice in this world well not any more if the details of this story at the guardian.co.uk are correct.

The Times Newspapers which is owned by Rupert Murdoch, the same person who is one of the more outspoken people in declaring how piracy is destroying the newspaper industry is understood to be facing damages of about $250,000 for copyright infringement. The Sunday Times in September 2006 gave away with the print edition of its newspaper a CD that featured 10 tracks from a live performance by the late Jimi Hendrix recorded at London's Royal Albert Hall in February 1969. This in itself is not that news worthy however it appears that the Times had somehow forgot to acquire the copyright licence to legally do this and thus has been successfully sued.

Two US companies associated with the Hendrix estate, Experience Hendrix and Last Experience, launched legal action three years ago claiming the newspaper, published by News International subsidiary Times Newspapers, did not obtain the proper copyright clearance for the giveaway. It appears that footage of this Hendrix's recording was due to be released as a film by these companies as well as an accompanying DVD and CDs. These two companies claimed the free CD delayed this project and would have negative impact on the profits from the project. In May 2008 they turned to the courts to pursue a claim for damages relating to loss of earnings.

So last week in the UK High court judge Sir William Blackburne ruled that the Sunday Times had erred in using the copyright with out permission and has ordered the Times to pay damages and although the precise damages figure is still being worked out by the two sides' legal teams it is understood it will be just over $250,000.

This does not sound like a lot of money considering the scope of the infringement; more than 1.3 million copies of the CD were given away, so this equals approx 20 cents per infringement. Compare this damage figure awarded against News Corp to those of the two highest profile cases in the USA where the verdicts against Joel Tenenbaum and Jammie Thomas-Rasset resulted in damages of $54,000 and $67,500 respectively being awarded against them. I should however note that in both these cases the original award was actually ten times higher but was reduced by the judges on the grounds they were manifestly unfair.

So lets get this clear Rupert Murdoch infringes for profit and is fined 20 cents per incident, two US residents are accursed of illegally downloaded a handful of songs for personal use and are stung $2250 per infringement. This just seems wrong on so many levels but I am not surprised. Is it any wonder that people have lost respect for copyright, if the largest media organisations either don’t care or just think that the law was not created for them to adhere to and therefore pay it scant regard or if caught infringing are given only a light slap on the wrist.

So the next time you hear big media pontificating about the evils of pirates and that consumers are stealing their content, just remember that they are just as much the thief in all of this its just they have more clout, better lawyers and no doubt quite a few politicians in their back pocket. Mind you they are not the problem per say its just the silly laws that they have lobbied to have that shore up their business models to the exclusion of all others through the corruption of copyright.

What do you think? Leave me a comment I’ll never steal your words.
Posted by rorybaust at 09:02