How quick is quick these days? 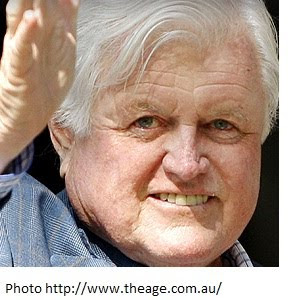 Did you hear that Ted Kennedy died yesterday? Of course you did, because if you are reading this, your reading this online and news travels very fast these days, well it does if your online and have upgraded from that old 56k dial up account you used to have. STOP! Please don’t, click that BACK key, this is not just another tribute article, well actually it’s not a tribute article at all.
What! don’t get stuffy with me you were just about to leave anyway, plus I am an Aussie whom although I knew of and respected Teddy, really couldn’t put two sentences together about the great man so instead I want to write about “what time did you hear of Ted Kennedy’s death ?
It was just another day in TBB household, Wednesday the 26th August 09 (I live in Australia so all times are referenced as + 10 hr GMT) I was catching up my Twitter posts when at 3.29pm crikey-news published a Twitter update that Ted Kennedy had died.
OMG! live breaking news, and me a budding journalist and all, I need to verify this, yeah you heard right. Oh yeah the other part of crikey-news tweet was I suppose a snide comment aimed at Richard Wilkins asking that if the world also let him know about Ted’s death. Who is Richard Wilkins? I hear you ask and why is he at all important, well after the death of Michael Jackson and on national morning television Richard announced to the Australian public that Jeff Goldblum had also died that day, he had not, Richard had fallen for an internet hoax. See it’s important to check your sources and some times verification is as easy as a few clicks and your done.
So how does one verify a breaking story from the Internet? With the Internet of course, it’s the fastest information medium on earth these days. OK you sound confused, using the same tool to verify the source of the news, well it’s really easy just enter the URL of your most trustworthy news service and see if they are reporting said breaking news, if yes or no just repeat procedure at your next trusted news site and so on, now I would say that 2 or more hits from respectable news sites would do the trick, but that up to you, I wonder how many Richard checks?
I was able to verify Ted’s death by the third site that I visited. 1st The Age (did not report to 3.41 pm) 2nd ABC aware of death no details, 3rd CNN had posted story, so at 3.37pm I posted an update on Twitter to my followers. I was happy that I had, had a small part in breaking some breaking news and after my post a deluge of posts followed BBC via Twitter 3.40pm, Time magazine 3.45pm via Twitter and so on.
Ok you say, I posted some breaking news on Twitter, no big deal so did everybody, and yes many people did and I think that it’s great, the free expression of news and ideas can only be a good thing, can’t it. But latterly there has been a lot of talk about online news and how the bloggers of the world are just stealing content and reposting it, sometimes as their own works. Newspapers are going broke and it’s all our fault, why it’s our fault is a little unclear, but still apparently this will have to stop. With out the media there would be no new news, so the world’s media are looking to build walled gardens around their News sites and we the reader if thats what we want to remain, are going to have to pay up, and yes the News will once again be owned by big media.
Now that they have built their nice little pay sites, what stops those nasty little bloggers doing what they have always done and just paying and stealing the content anyway. I don’t know but I suspect it might have some to do with enacting copyright.
Copyright has in the past as is now been used to protect the economic interests of the creator’s of semi intangible ideas and concepts allowing them to assert ownership over said concepts for a pre determined period of time, and thus allowing them to profit from their work and stimulate the further creation of ideas and works by others in providing an artificial mechanism of protection from theft.
So to my point, if big media owns the news, will I be able to post of said news in my own words to this blog, or will I be barred for a pre determined amount of time from reporting because NEWSDOTCOM owns that story.
are these possible new Twitter post of the future?
“ Breaking News, due to Copyright restrictions I am unable to divulge said news, but believe me it’s huge and you really want to know, I am sorry, if you really can’t wait then I hear that NEWSDOTCOM has all the news fit to pay for. “
“ Yesterdays news according to NEWSDOTCOM Ted Kennedy died yesterday”
Think this can’t or will not happen, I bet you thought you owned your music collection too.
Buzzzzzzzzzzzzzzzzzzzzzzzzzzzzzzzzzzzzzzzzzzzzzzzzzzzzzzzzzz
Posted by rorybaust at 09:52